Stone Ministry is a program that leads Kingswood campers to create a physical connection to the Camp, its community, and God’s creation through stone masonry.

Campers first select stones that were rejected by the previous farmers of the camp land as not worthy for building.  Next the campers scrub the stones free of their temporary soil stains and inscribe them with personal messages.  Finally, the campers mix mortar and cement the stones into the timeless evolving Stone Ministry Structure.

The stone and its invisible message become permanent and integral parts of the structure and are therefore anchors for the camper into community harmony and God’s peace which are hallmarks of Kingswood Campsite.

“EVERY STONE IS A KEYSTONE”

If any stone became missing from the structure, in its place there would be a void.  All stones, no matter their size, shape, color or texture support the stones all around them.  No two stones are alike.  Their similarity is that they were tossed aside when the farmers cleared the fields as unfit for building foundations or walls.

Like the stones, God makes each one of us unique.  We are also each blessed with certain spiritual gifts.  Our challenge is to recognize those gifts and use them to support the human structure around us.

“The stone that the builders rejected has become the cornerstone.” 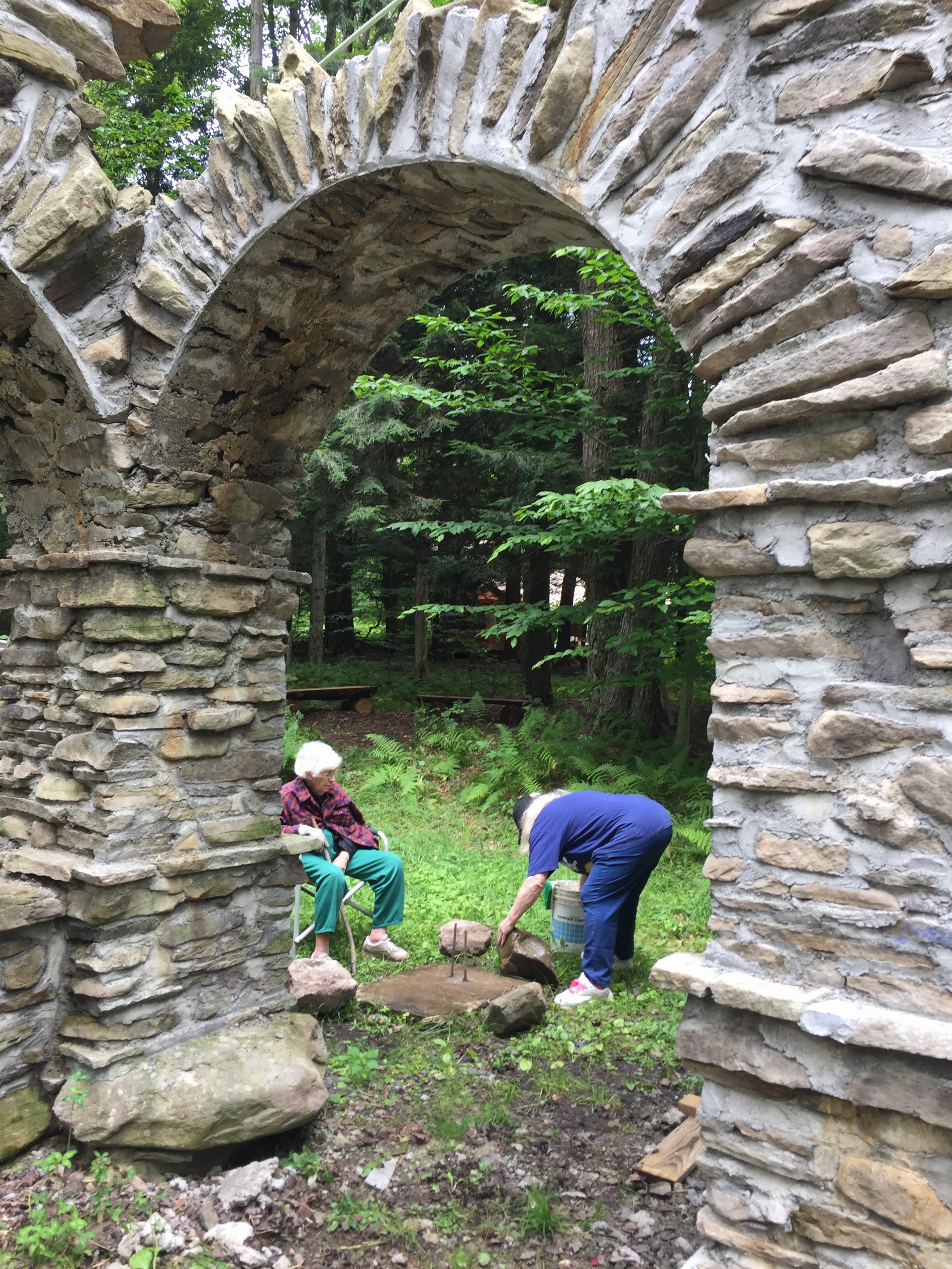 In 2004 the Kingswood Campsite Site Committee decided to initiate the Stone Ministry program.  19 potential locations were considered.  A site in the woods 700 feet north of Eagle Field was selected due to its “cathedral-like” setting and because it was close enough to be accessible, but far enough to be secluded.

That fall 45 tons of concrete were poured into an excavation that formed the foundation for the end wall of the structure that would have the huge fireplace and chimney at its center.  The next summer, campers dedicated and cemented the first stones into what would grow slowly for a very long time.

Each year since then, somewhere around 200 people have added stones with messages.  Of course, a lot of the campers cement stones every year.  There is no limit to how many stones someone can put in.

Gradually, over the years the fireplace took shape and the chimney above grew taller.  After four years, as part of Kingswood’s 50 year anniversary celebration, the first fire was lit in the Stone Ministry fireplace. 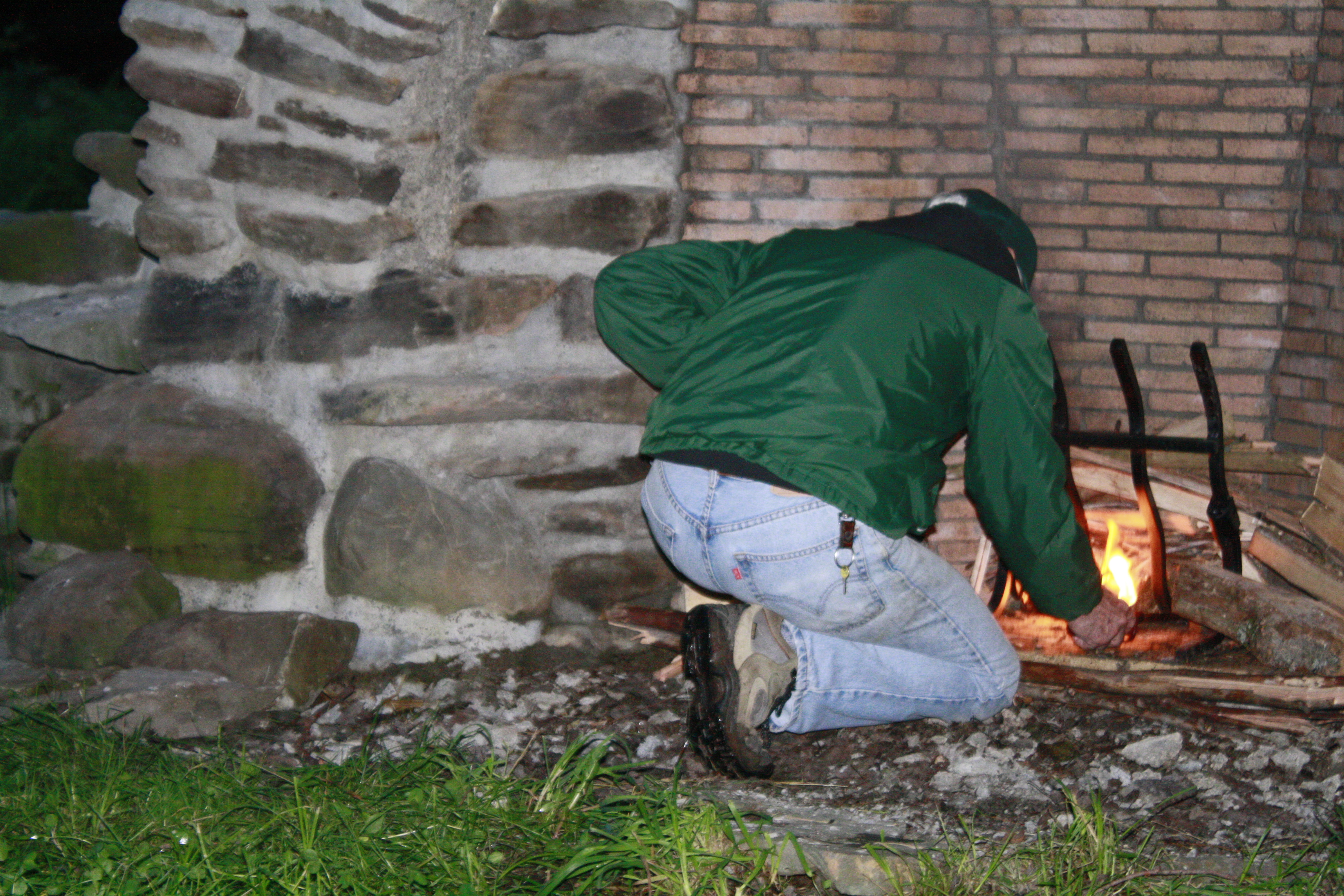 People kept putting in stones every year.  Stone arches grew from the chimney over to stone pillars flanking the fireplace.  Then in 2013, it was time for more excavation and another 45 tons of concrete to make foundations for rows of arches perpendicular to the fireplace end wall.  These arches could eventually be the side walls of a “Chapel in the Woods.”

In 2014 we started stone pillars dedicated to Charlie Carter and Jack Seirup, who both were pillars of Kingwood and both died on March 4 that year.  Jack had been an instrumental part of The Stone Ministry for its then 10-year life.  Within columns dedicated to individuals the stones can be, and are, dedicated to many diverse subjects.

In 2017 Charlie and Jack’s columns were completed, and we started another column dedicated to Ron DeLuca, another pillar of the camp and one of the original Stone Ministry founders.  All that summer his many children (and grandchildren) came with their mother, Lois, to cement stones into Ron’s column. 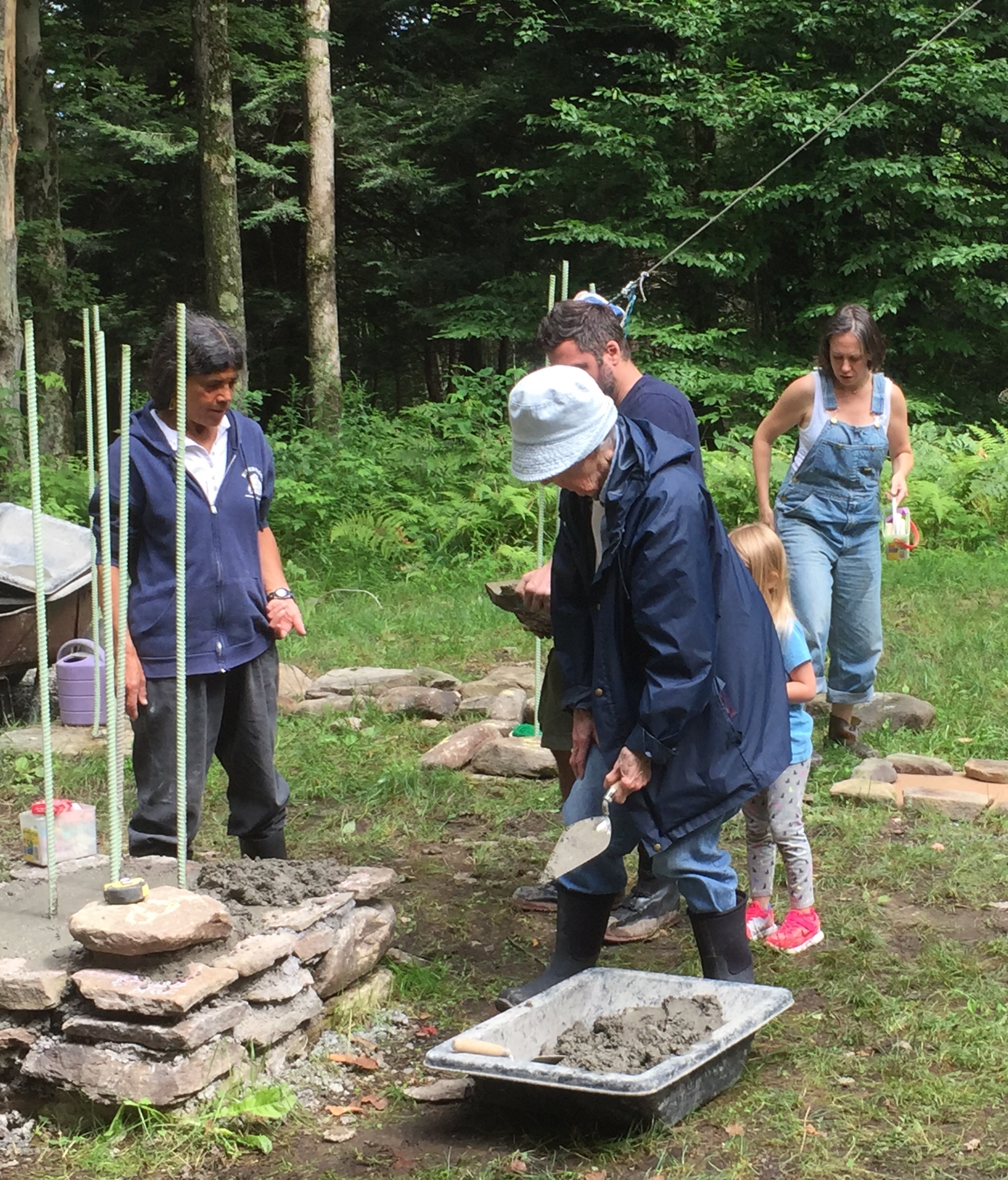 Also, in 2017 it was time to gather timber for a roof structure over this western portion of the Chapel that was taking shape.  So we cut down two dozen big hemlock trees near to the building and had a portable sawmill turn them into appropriately-sized timbers.

WHEN WILL IT BE DONE?

People are always asking:  When will it be done?

Well, that is not entirely clear.  Everything in God’s time.  Years ago, Reverend Jim Moore, a long time member of the Kingswood community, now a retired District Superintendent of the United Methodist Church (the Church that owns the camp) and one of our Stone Ministry Masons who helps run the program, called our program “Wonderfully Impractical.”

And it is about a dream.  A dream that one day, as a by-product, we may actually have a stone Chapel in the Woods … actually made of thousands of keystones.

That being said, biblical things seem to take about 40 years.  Perchance if this is biblical, we are somewhere around on schedule. 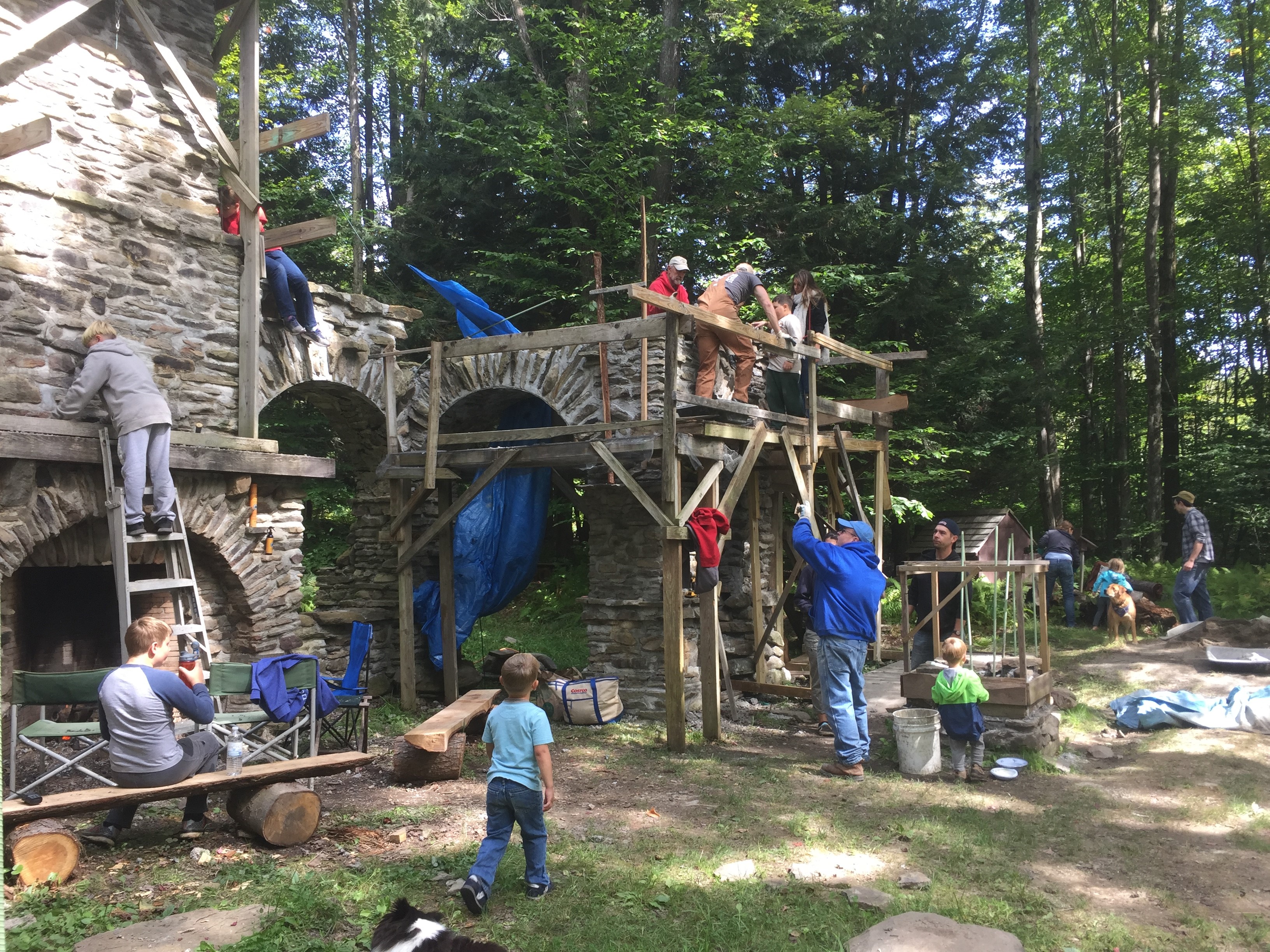 That also is a bit fuzzy,  but it is coming more into focus … after all, more and more of the building is “cast in stone” now.

The Spirit seems to let out the vision in bits and pieces as necessary.  Some of the original visions have evolved significantly over the years.  But, we have never had to significantly backtrack as the vision became clearer.  Just sketches changed.  Just now we have the first renderings of what Kingswood’s  Stone Ministry Chapel in the Woods may look like: 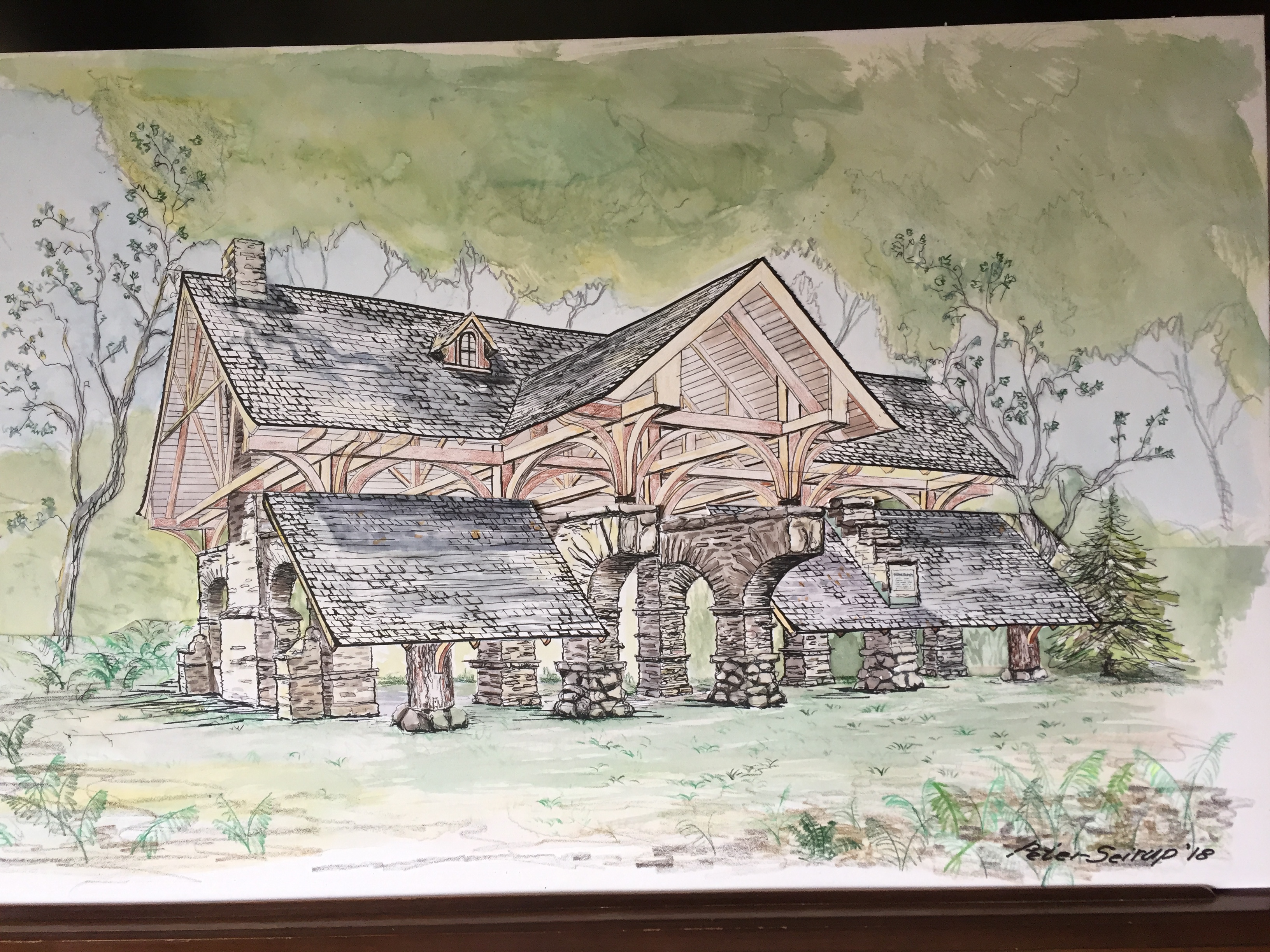 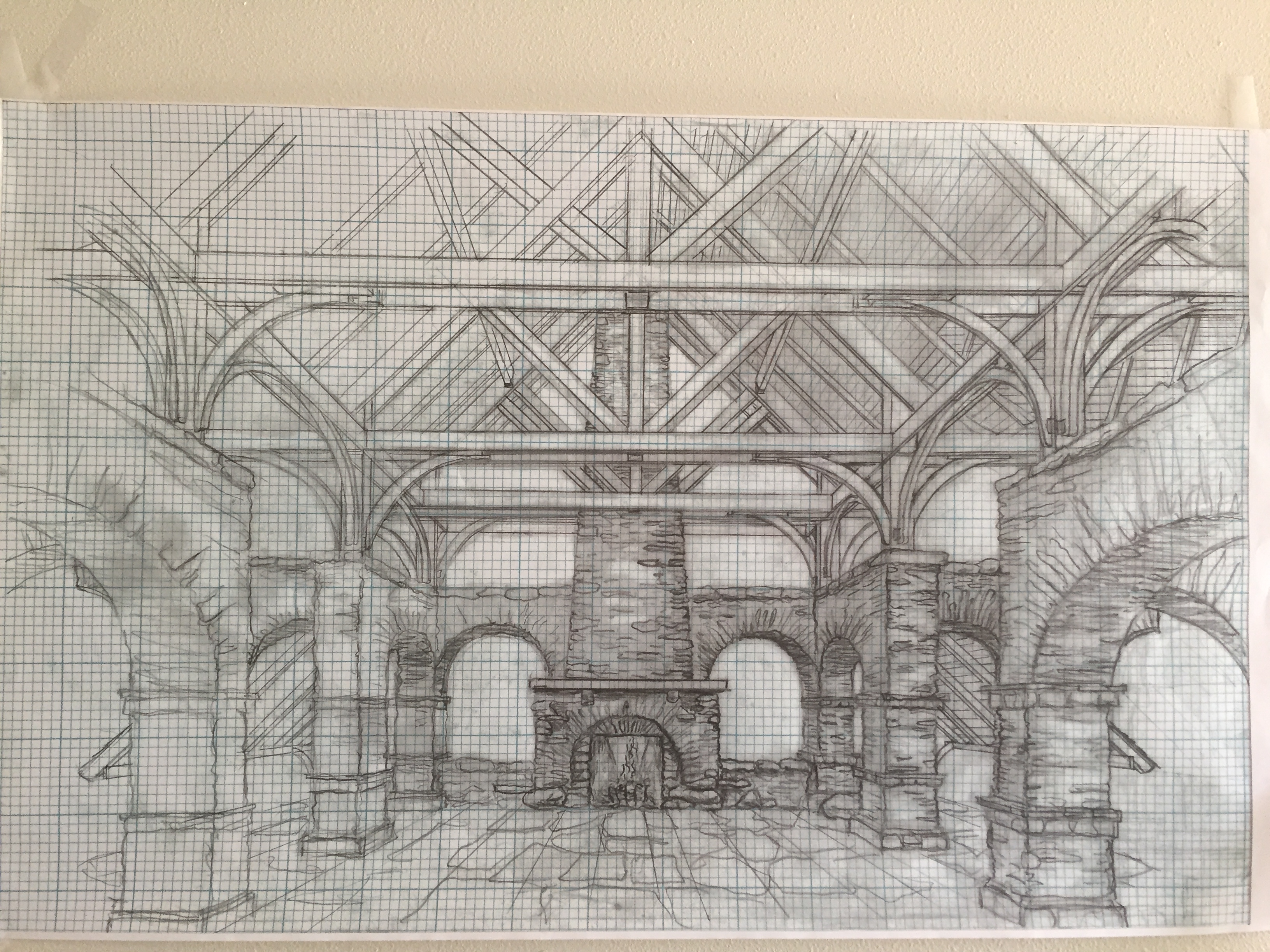 Stone Ministry cementing sessions take place on Fridays and Saturdays throughout the summer season.  The traditional session includes a tractor ride from the Barn to the Stone Ministry site.  Sometimes we stop by a remote stone pile to gather stones; other times, we chose stones from the piles we have already relocated to the site. 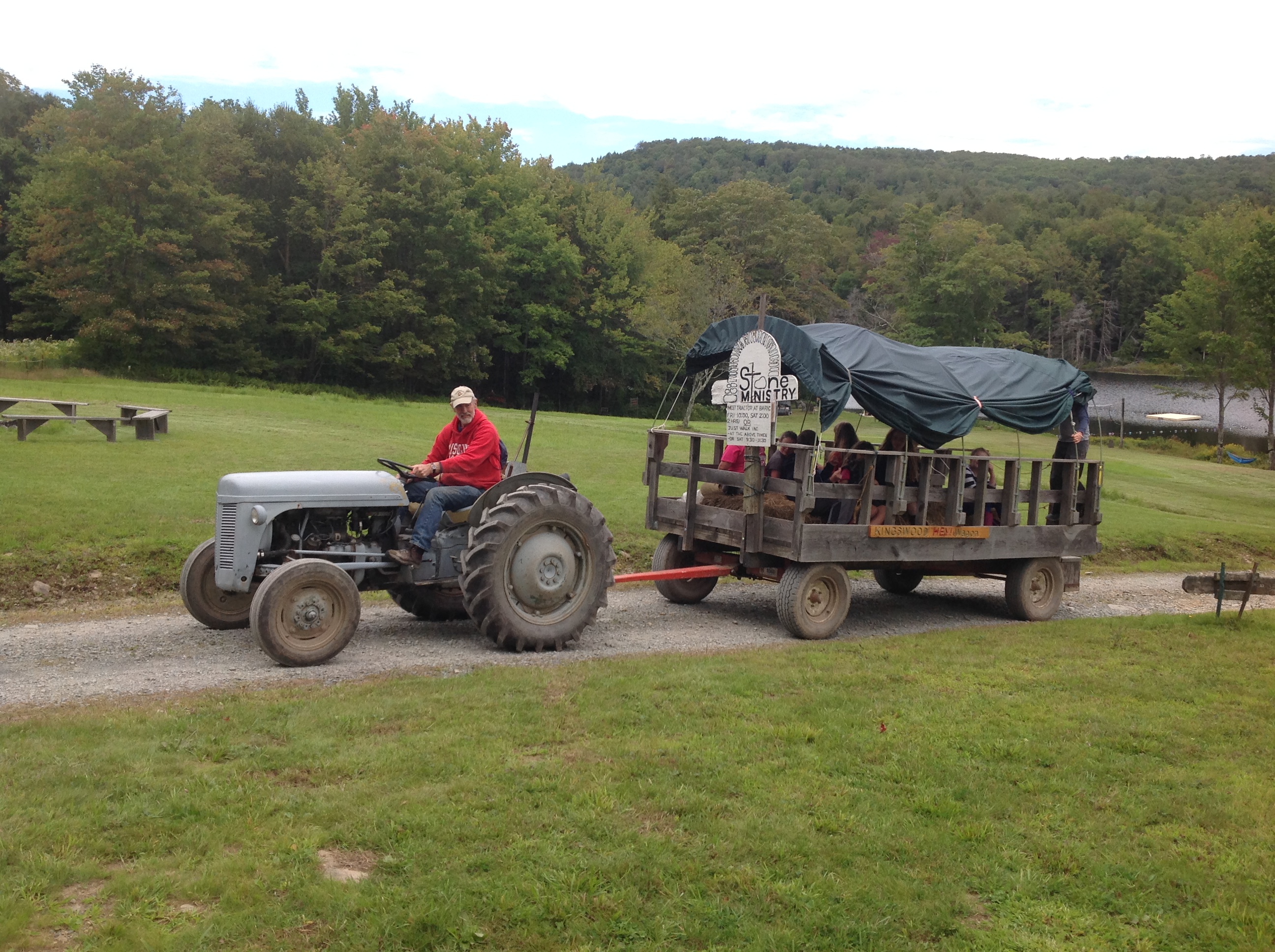 The group washes and marks its stones, then mixes mortar before cementing the stones into wherever we happen to be working that day.  Participants are encouraged to have some reflection time in our Hemlock Sanctuary as they wait for their turn to cement in their stone (or stones).

Finally, the hay wagon delivers everyone back to the Barn.

People who would prefer to forgo the tractor ride can meet at the site.  Also, hailing the tractor as it passes your campsite is encouraged.

Free time to cement stones on a walk-in basis is available every Saturday AM from 9:30-11:30.

HOW IS THS STONE MINISTRY FUNDED?

By donations.  It is separate from the Camp’s operating budget.

If you would like to make a donation to The Stone Ministry, please contact the Kingswood Campsite Treasurer. 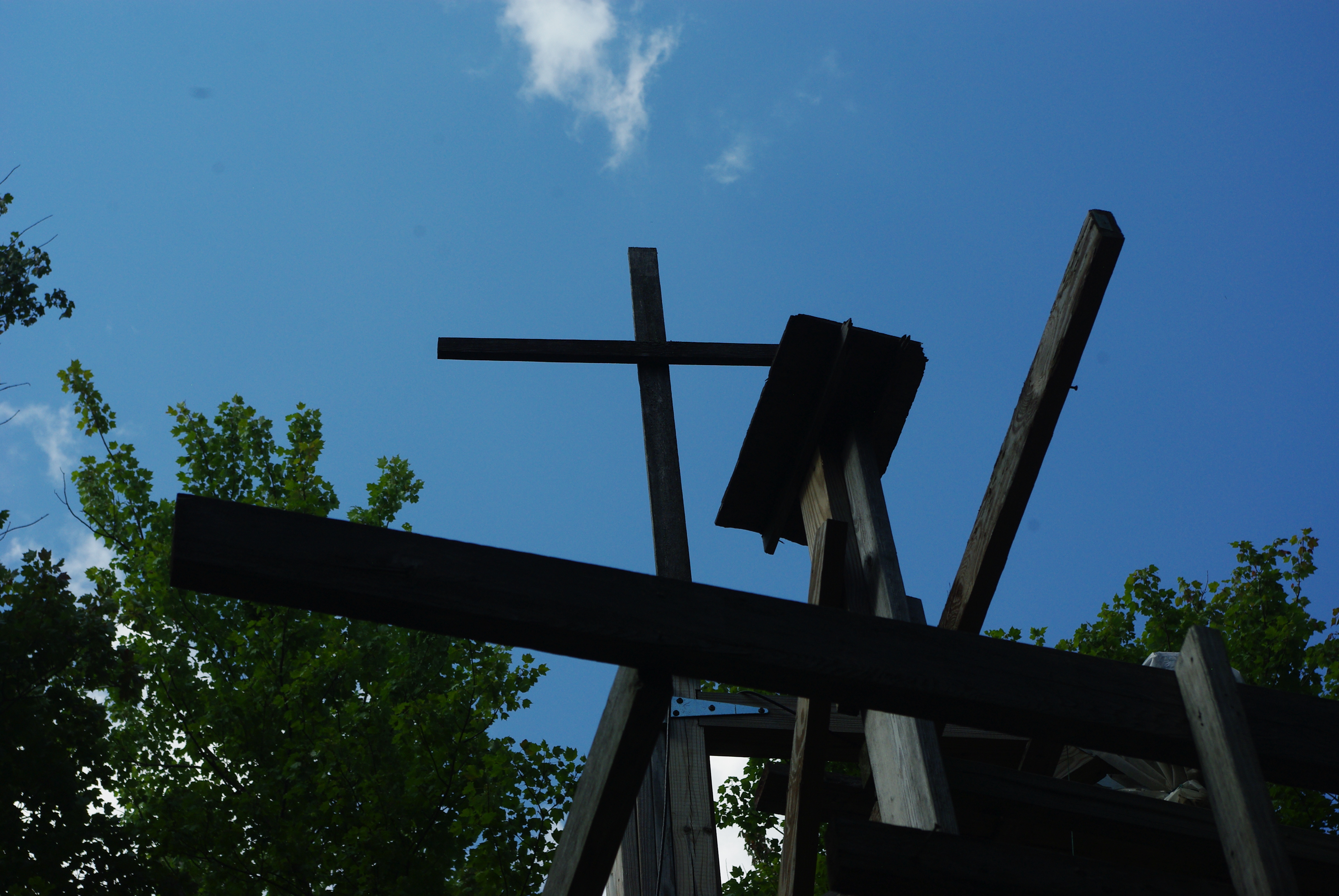